Windows Terminal running Ubuntu is where I launch Visual Studio from now using this tool which I call d.exe short for DevEnv.

OpenVSSolution source is here with a download exe link here.

See latest post on upgrading to .NET Core 3 which makes a lot of this article historical.

I like to drive my Windows 10 development machine from the command line using the Cmder Shell: 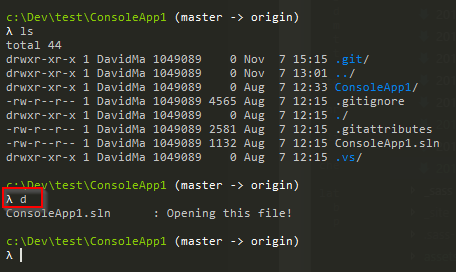 When I type d (short for devenv.exe) it opens up Visual Studio and loads the ConsoleApp1.sln

How does it do this? 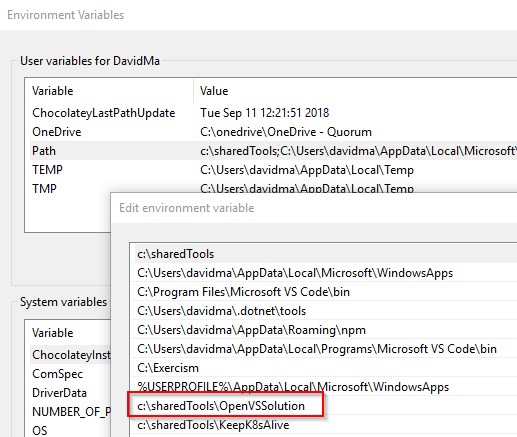 Let’s look at my OpenVSSolution:

It is a .NET Core Console Application called OpenVSSolution with a download exe link here. If you want to download it now and put it in the path now go for it.

and the reason it is called d.exe is in the .csproj file I’ve named the assembly as d.

How to Publish and Distribute a .NET Core Console Application?

-c is for Configuration. Default is Debug.

You’ll get a 24kb Framework-dependent deployment (FDD) Microsoft .NET Core Application Deployment which you can run from the command line with dotnet d.dll

You don’t have to target the operating system - so this dll can run on Linux as well.

Let’s target only the Windows platform:

The -r is the Runtime Identifier Microsoft Docs

…you deploy your app and any required third-party dependencies along with the version of .NET Core that you used to build the app. Microsoft .NET Core Application Deployment

This doesn’t include any native dependencies but they are included from Win7SP1 and above on Windows.

This is a Self-contained deployment (SCD) This looks like it should work as there is an .exe and a publish folder with the version of .NET Core in the publish directory.

On Windows this gives a 67MB release folder which looks like it should be able to be copied and distributed.

Assembly specified in the application dependencies manifest (d.deps.json) was not found

Try transporting to another machine and you may get:

Go into the publish directory

This can now be shared amongst all my machines and I don’t have to make sure a certain version of .NET Core is installed.

Code now looks for a VS2019 install and prefers that over a VS2017 install.

See latest blogpost on upgrading to .NET Core 3. I also fixed a bug where if the file path contains a space it wouldn’t run.