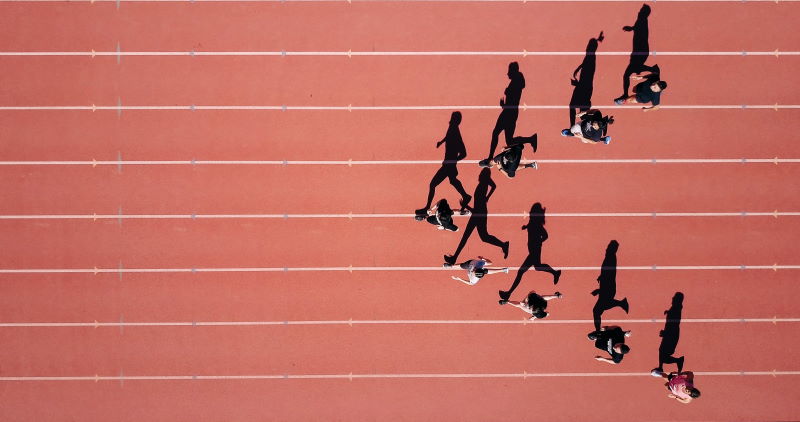 I need simultaneous http connections as 1 at a time is toooo slow :-) The 2 strategies considered were:

Stephen Cleary wrote in these comments

Synchronous concurrency (parallelism) is using multiple threads, and is an appropriate choice if you have CPU-bound code.

Asynchronous concurrency is a form of concurrency that does not require additional threads, and is an appropriate choice if you have I/O-bound code.

So I went with async await as I’m I/O bound with my http connections whilst the crawler is working.

This took my a while to get my head around, and a big thanks to Tom Parslow for guidance.

What is Async Await

Async/await … is not about threads. It’s about suspending the execution awaiting for the result, and releasing resources for other code source

Async all the way down I found to be a good explanation too.

C# under the hood async shows in detail how the underlying generated state machine works if you want to dive deeper.

Show me some code…. 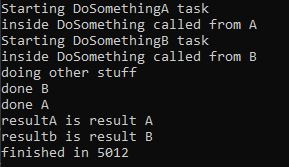 Interestingly the DoSomethingB finished first above, yet we had to await the A task finishing first. We could use the Task.WhenAny() pattern (shown below) to get the first completed task.

There is a good diagram in this SO Answer

Does every method need to be async await

“Any async method where you have a single await expression awaiting a Task or Task<T>, right at the end of the method with no further processing, would be better off being written without using async/await”

Using Task to get multiple connections

This example comes from MS Docs on how to handle multiple http request using async await.

Is async await concurrent is a good question ie should I be worried about thread safety writing back to the downloadTasks? In this case no.

Interestingly we can use Lists, Queues etc.. as behind the scenes it is all thread safe (the same thread!) just state machines and callbacks doing control flow.. We don’t need to use ConcurrentList etc..

I think this WhenAny solution is appropriate but if there are too many tasks on the queue then it may not be. I’m going to limit the number of tasks for a different reason below.

A simple solution is to limit the number of tasks added to the list:

Limiting the tasks in a smarter manner

Is this way we can:

Will this use multiple cores

Yes, however it is way I used the Task’s which can use multiple cores. Here is a bashtop screenshot of a crawler using PuppeteerSharp (which takes a lot of resources to run as it is Chrome).

The crawler running 1 Task at a time 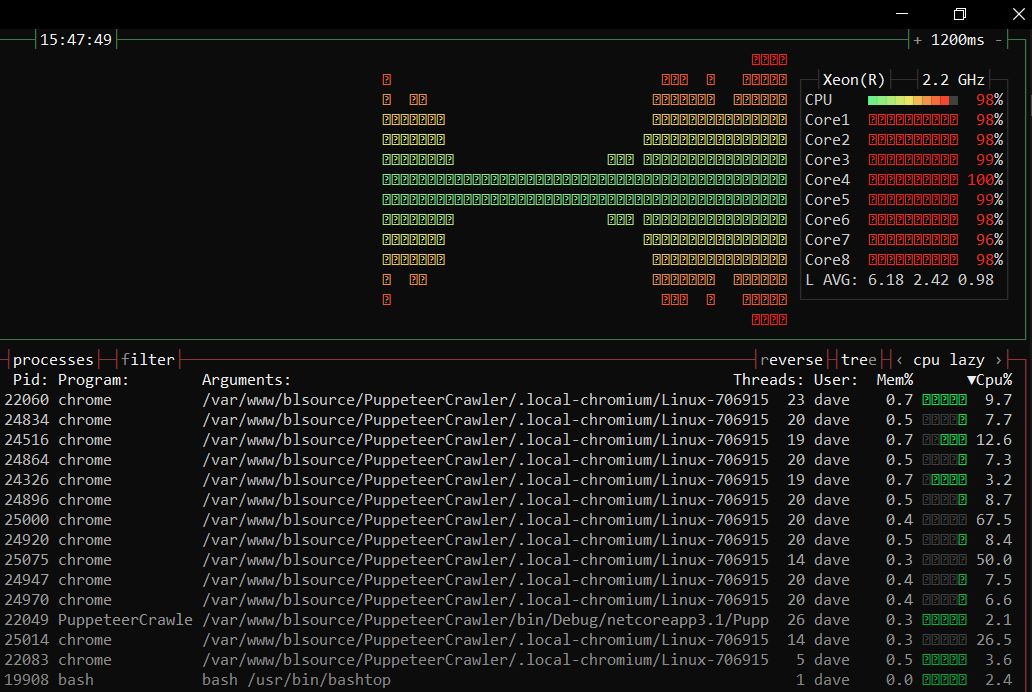 The crawler running 12 Tasks at a time, on an 8 core machine.

There is no thread

IO tasks are not CPU bound and thus do not require a thread. The main point of async is to not block threads during IO bound tasks

There is actually someone doing the work in the background with I/O operations. It is not a thread but another dedicated hardware component doing its job

DB Connections async all the way up

DB Connections are another I/O bound task where asynchronous concurrency is a good fit. Async await allows the thread not be blocked but must be async all the way. The SO answer on async all the way up is enlightening.

Async await with Dapper article showed my initial explorations of async a few years ago. I can’t imagine not using async now for situations like this.

Async has become the default for db work.

Asynchronous concurrency is a form of concurrency that does not require additional threads, and is an appropriate choice if you have I/O-bound code.

For my I/O bound Http and DB calls async await concurrency is a good fit.

I love that I can treat the code as ‘normal’ without having to use multi-threading techniques and special collections which deal with locking.

The secret sauce of async await gives us developers a huge amount of power!