Both these articles were written when I needed to use DevOps, and now I’m not using it (March 2020) so I’m putting the thoughts at the time online.

What is Azure DevOps

Azure DevOps is a collection of services:

Use the YAML way of defining Azure DevOps. I found that exploring the GUI was very helping in understanding the product, but Infrastructure as Code (IaC) is where you should be

For continuous delivery especially for collaboration / more complex projects this pipeline is invaluable. It needs time and work to set it up and maintain it.

There has been a lot of people commenting on the UI and I can confirm there is a steep learning curve.

Excellent video from NDC London 2019 giving a good overview starting with the many names some of the tools have been called eg VSTS, VSO, TFS

Goal is that infrastructure should be defined just like code, which can be checked into source control. So then we can spin up all the infrastructure in Azure at any point eg for a Feature branch that I want to test.

Perhaps there is webserver (PaaS) and a database (MSSQL) initially.

Below is shown how to setup the Build and Release pipelines in the GUI, however in the next article we will explore the azure-pipelines.yml recommended way. 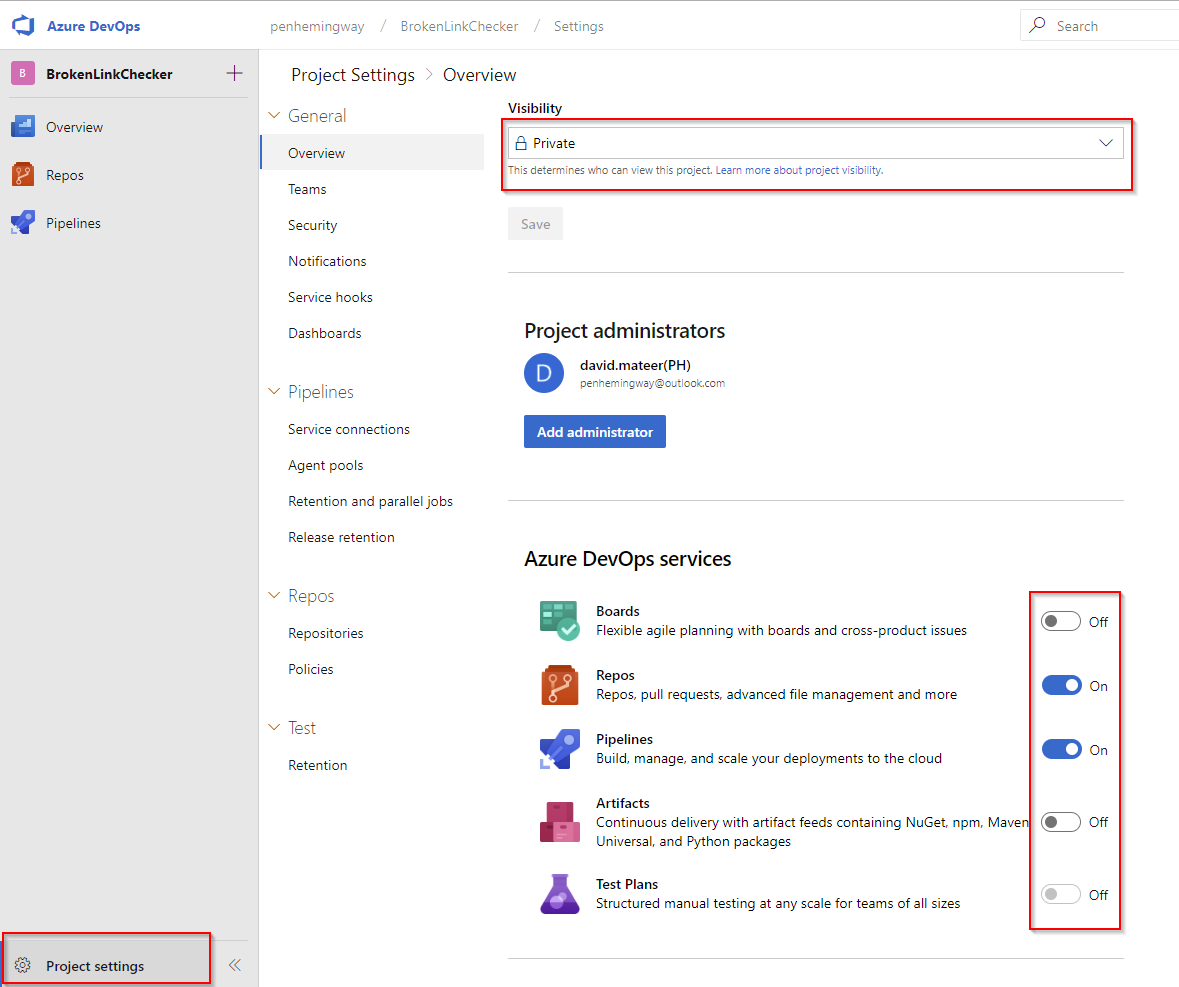 After setting up a repository with a single index.html in it with ‘Hello World’ as text, lets make a Continuous Deployment pipeline that deploys to the live Azure App Service whenever a new commit is pushed to the master branch. 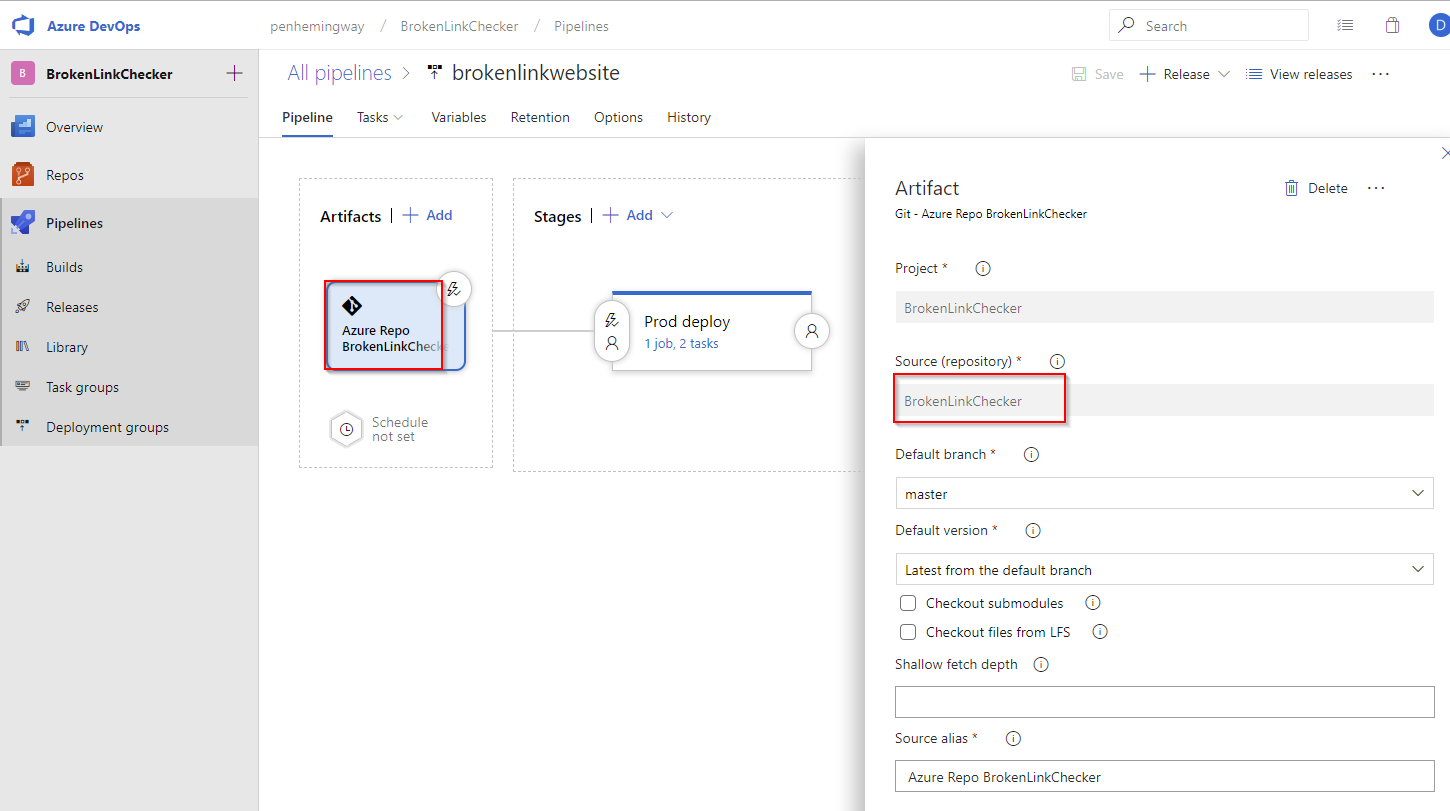 Step 2 - Trigger getting the Artifact

Step 3 - Stages create an Agent to do the Deploy 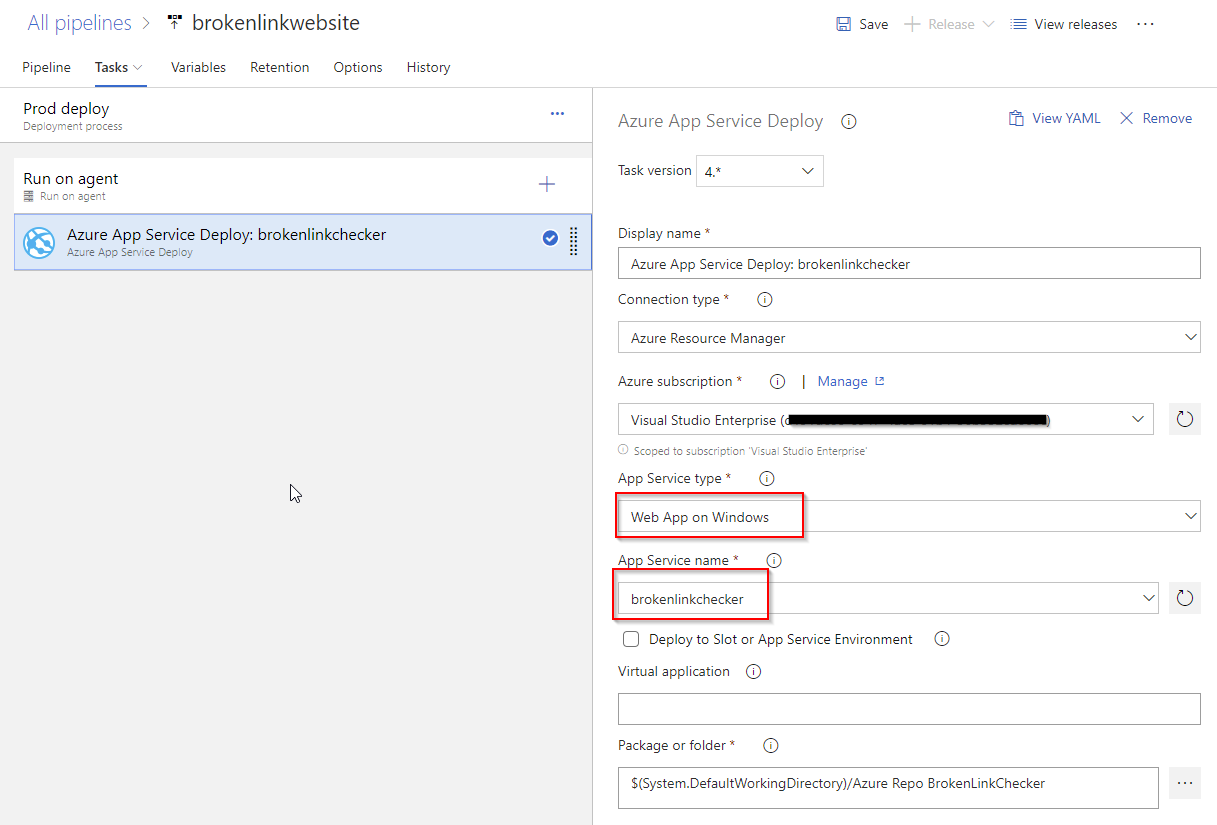 So it is zipping up everything in the linked repository and sending to an already created App Service in Azure.

For each release you can see the logs, and could deploy from here manually eg to roll back to a previous release.

Time to deploy to live site between 35s and 60s.

There is the yaml or visual designer way to do the Build. From the Azure DevOps Docs comments at the bottom it seems like yaml doesn’t have stages in Releases (eg dev, test, prod) or approvals in Releases which are very important.

The documentation recommends using the yaml way so everything is in source control, however others I’ve talked to who use this in production suggest the UI. 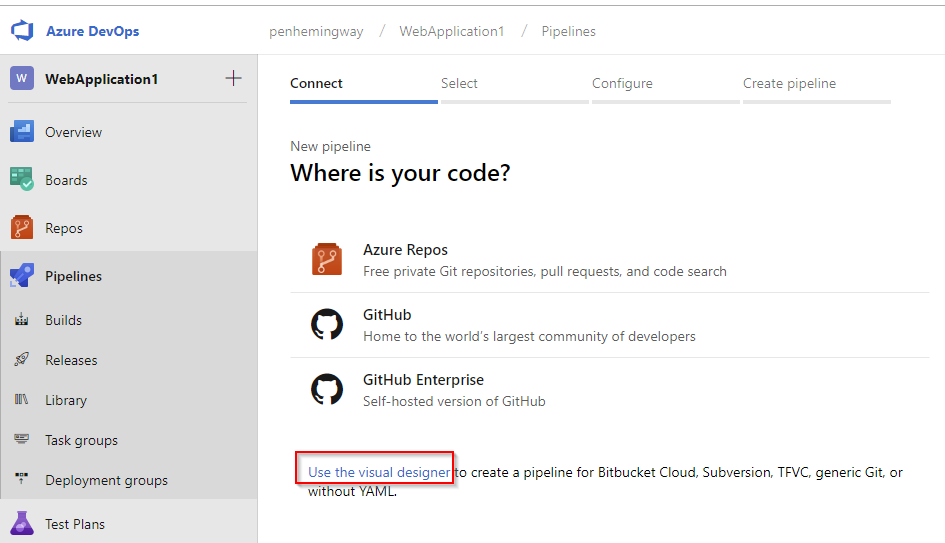 If Enable CI is not checked then it will not trigger on a Repo change.

Building all projects on an Ubuntu machine. Interestingly I’ve not got any test projects defined, so it just gives a warning. 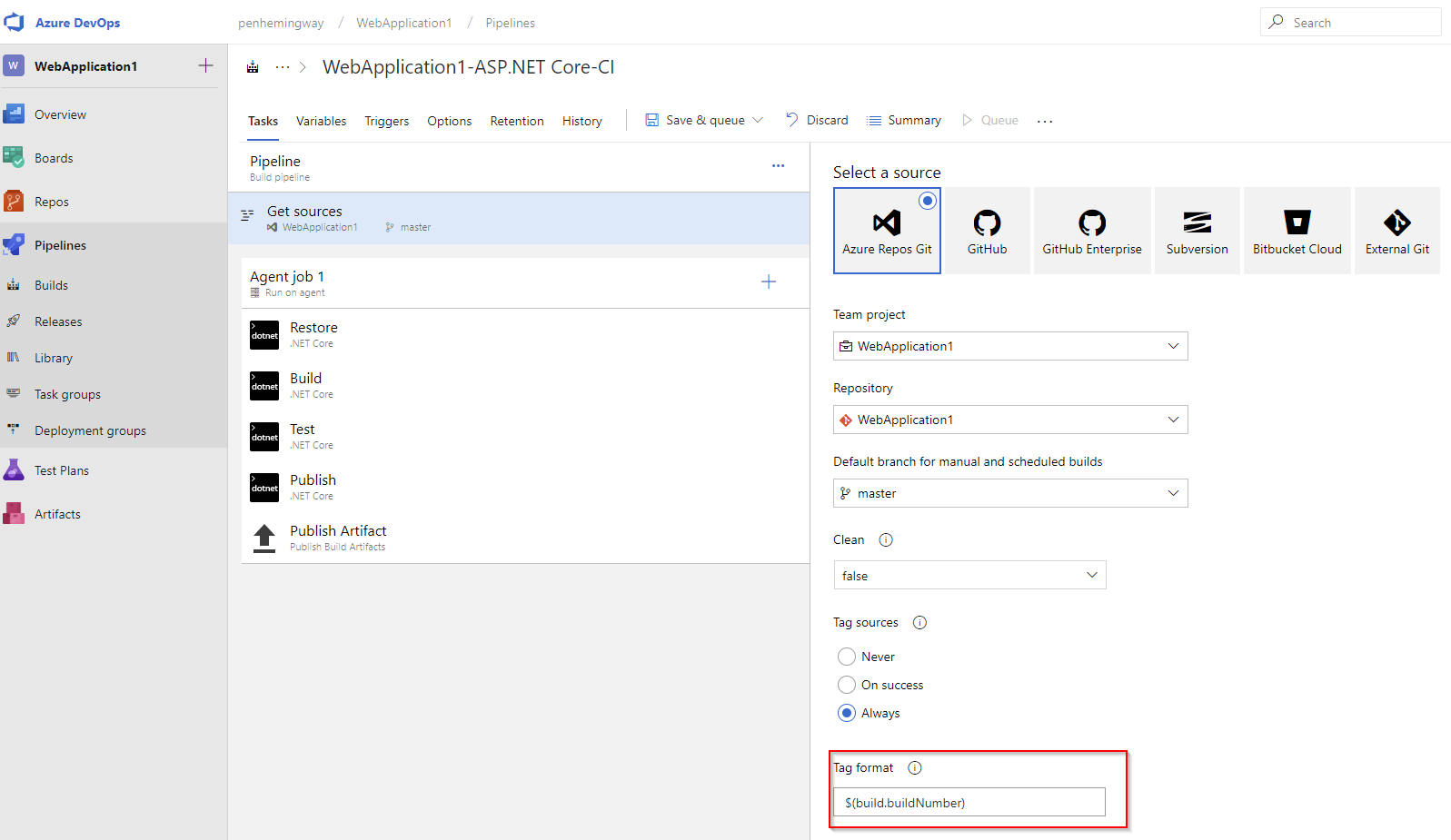 Setting the source Repo for the Build and branch. Tagging source repo always

We can see in source control which every build and its $build.buildNumber More Information on Microsoft Docs and all the predefined variables

Restore, Build, Test, Publish, and Publish Artifact (which doesn’t go into the Azure DevOps Artifacts, but is accessible from the Agent whic does Releases 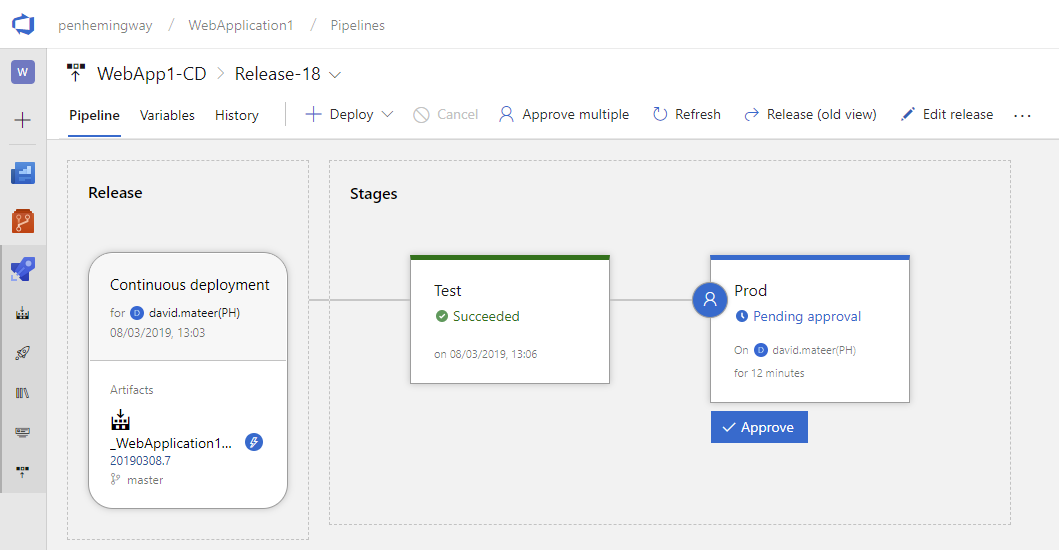 Setting up the Approval process so that I can approve. 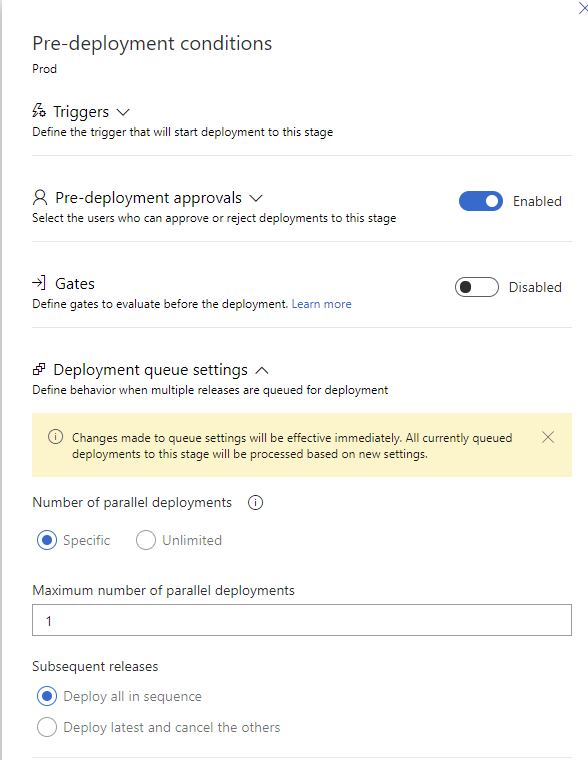 If you do this, then can only deploy the latest to Prod. I prefer the ability to promote any build to Prod (and can then easily promote a previous build to prod if something breaks), so use Unlimited above

We have Release-23 in Test and Release-22 in Prod.

Look in your personal settings to turn them on or off 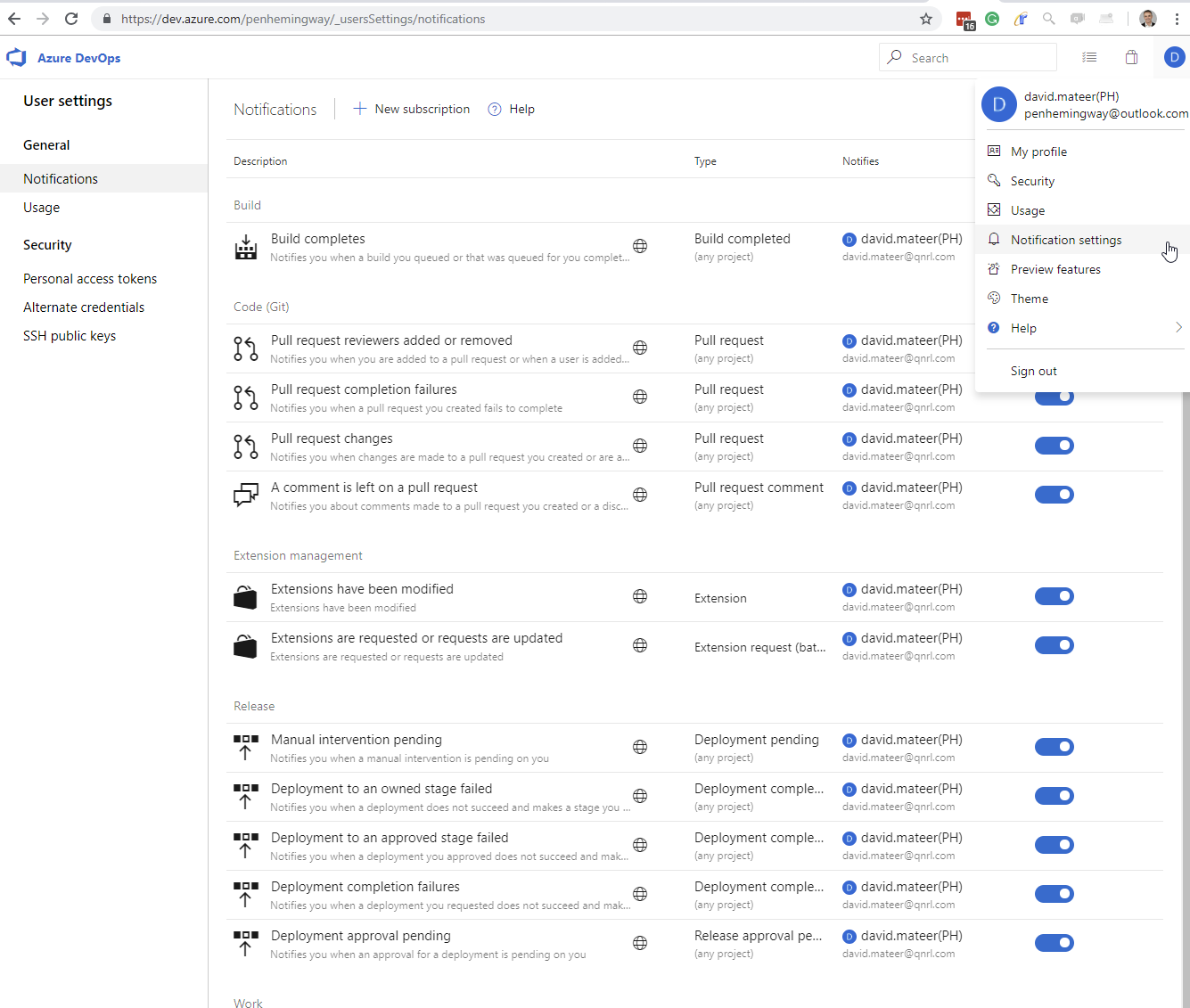 A handy screen to see how many build minutes we have used. Notice that Public projects get free build minutes. See below as I’ve gone to using the faster Self-hosted build agents.

We want an automated pipeline to put in the correct secrets into the application depends on which Stage eg Test/Prod we are in.

The simplest workflow is if we are using a ASP.NET Core web app, then put in variables in appsettings.json

Then in the Azure portal we can put in the secret connection strings. We don’t need the build chain to insert them (yet) as we have already got our Test and Prod enviornments built. 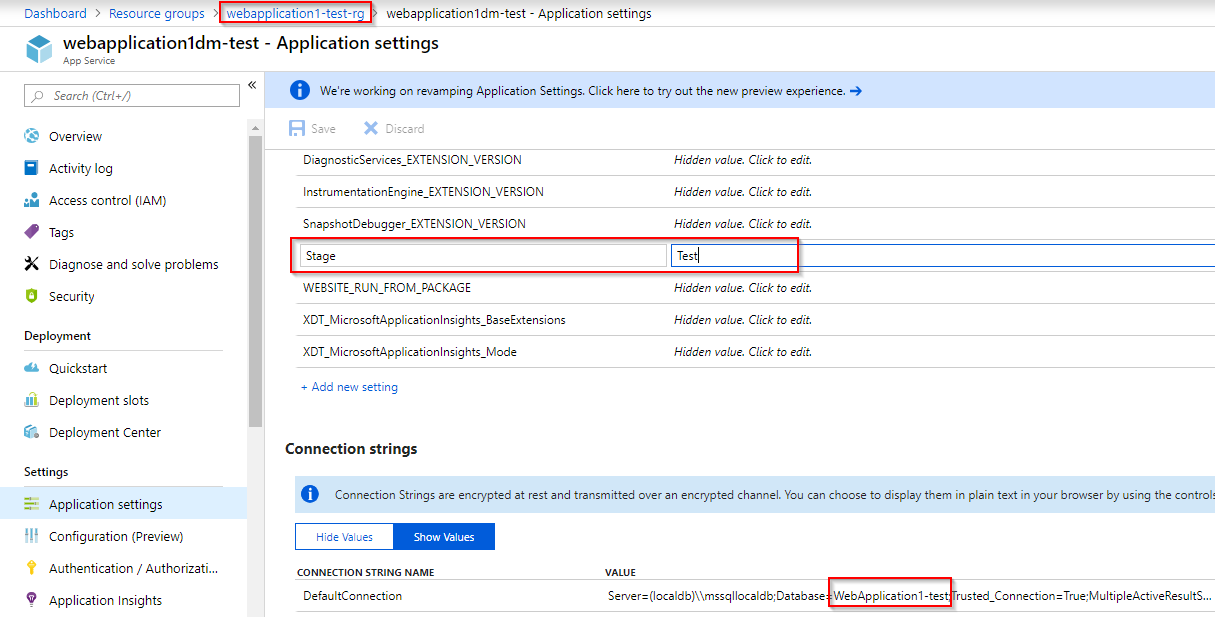 To access the configuration settings from say Index.cshtml.cs, you can use the ASP.NET Core’s DI to inject in IConfiguration which then allows us to read: -appsettings.json when running locally -Azure Application Settings and Connection Strings (these settings take precedence)

On the razor view:

To know exactly which build you are looking at on a Test / Prod server is invaluable. So many production issues have been solved this way.

The same build on Prod.

To add a variable which we can substitute:

I am using a json transform of the appsetting.json file 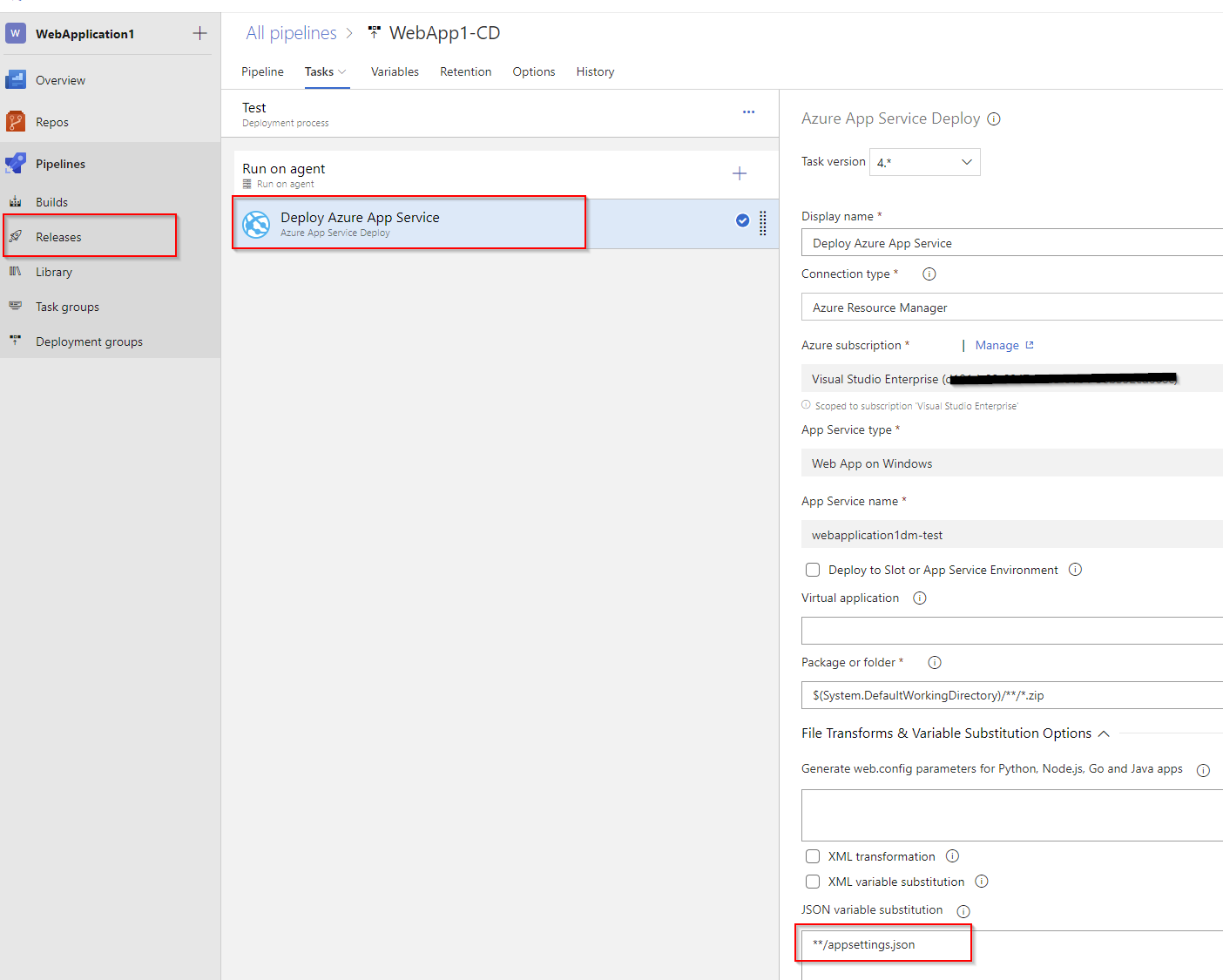 Set the json transform in Test and Prod Stages

Adding in variable in Releases, Variables

The Build.BuildNumber format can be modified 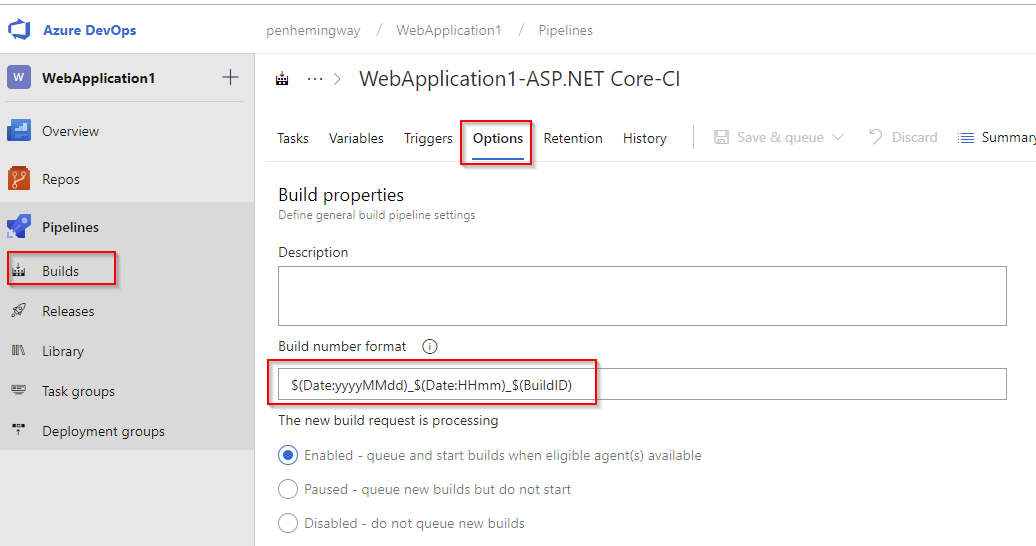 Setting the BuildNumber which is useful to display at the bottom of the final websites.

Having the BuildNumber 101, BuildDateTime 13:48, Stage: Test, and db connection string (part of it!).. provides invaluable debug information. StackOverflow do something similar with the BuildNumber.

I had an issue where the Build was triggering when a new commit was found on the branch, but the Release pipeline wasn’t picking up that a new artifact was there. It turned out to be an issue with DevOps which was shown on the status.dev.azure.com board

Even an hour after it was fixed I noticed issues - seeing a 17minute then 6minute then 4minute lag between Build finishing and Release artifact being picked up. I’m assuming it is message queues clearing.

To speed up the Builds and Releases I use my own Linux build agent running as a Docker container on my local windows machine (fast desktop with a 140Mbps synchronous internet connect). This is not recommended for Production, but is very good for experimentation with the system.

-VSTS_ACCOUNT is from: https://dev.azure.com/penhemingway/
-PAT Token can be got from: DevOps Portal, Your user icon, Security, then:
-VSTS_POOL is an obvious name (see below in Organisational settings, Agent Pools)
-VSTS_AGENT is the name of your build server 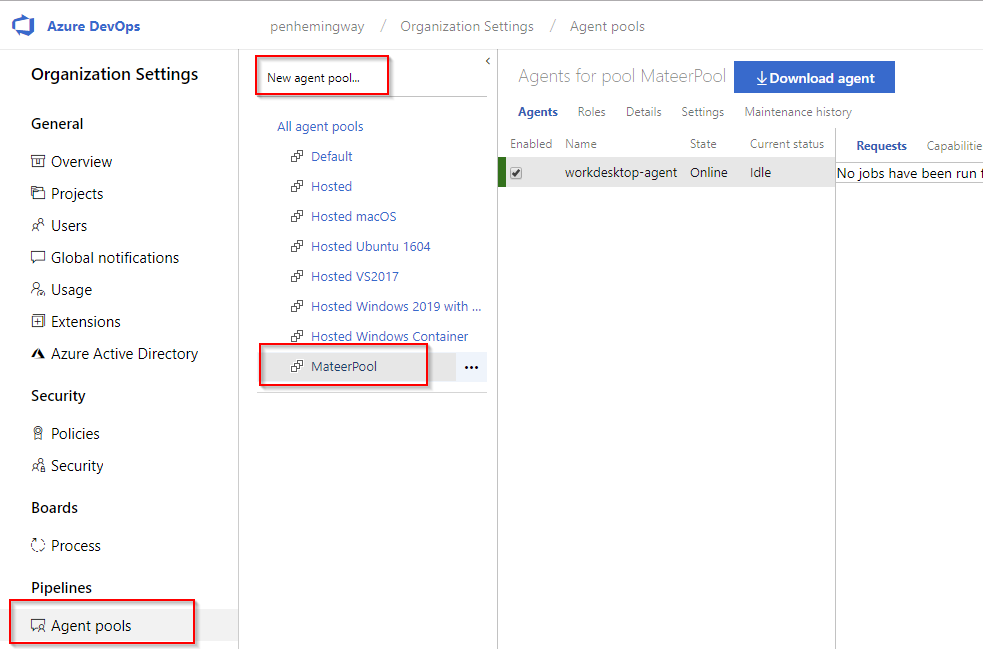 Setting up own pool makes it clearer in Builds and Pipelines (instead of the nebulous Default).

Performance improvements on local vs Hosted Ubuntu: -Builds from 2:30 to 17seconds -Release stage is much faster

Apparently they are working on a Windows Docker build agent but for now we have to use a local one: 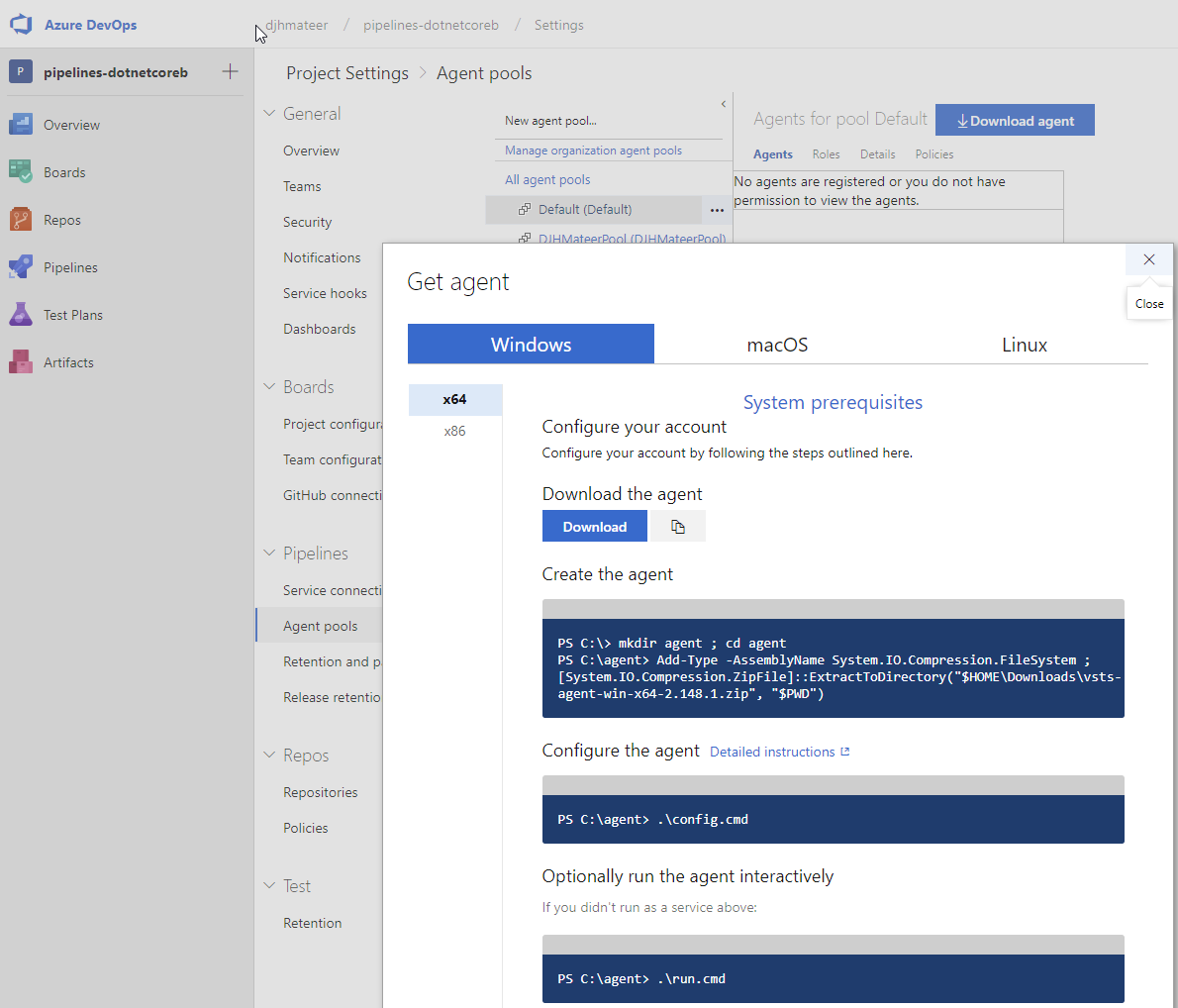 I found that using Powershell was the way forward (so don’t download the agent). Essentially:

To get debug error messages on Test, use the environment variable:

https://azuredevopslabs.com/labs/azuredevops/continuousintegration/ requries the Parts Unlimited project be setup. This is an ASP.NET 4.5 project talking to MSSQL.

We have looked at using the GUI for driving Azure DevOps.