Performance is an essential part of any business application.

Badly perfoming software generally doesn’t deliver its intended benefits to an organisation and is frustrating which leads to user’s mistakes. It usually costs more to maintain due to it being slow to develop/test/deploy.

MiniProfiler is one of the tools I use to continually measure performance. Over the last 2 years, every application I have written (and had to work on) has had MiniProfiler in it at some stage.

What is good performance? Ask the people who use your system. In my experience users will tell you with brutal honesty what they think. There is a lot of research too.

Miniprofiler overlays query times on any webpage. Here is a page showing 2 SQL queries which took 25.9ms to run.

How to do the database profiling bit

By far my biggest use of MiniProfiler is tuning SQL queries. Here is an example of a home page (always a good place to start looking at where to start optimising) query which took 160ms to run a search.

The business didn’t need lastname searching to be %lastname%, just lastname%, so after changing that:

We can see the performance improvement immediately:

Another useful feature is highlighting if there are duplicate queries shown in red with a !

3. Seeing where ORM queries need to be replaced

Object Relational Mappers (ORMs) save developers time writing boilerplace CRUD SQL. Entity Framework and Dapper.Contrib are what I most commonly use.

For high performance screens (typically home screens, summary views of large datasets) it can be writing an abstraction on top of an abstraction.. why optimise LINQ when SQL gives you much more control?

MiniProfiler makes it continually obvious where the problems are, therefore allowing developers to switch to raw SQL in those places. 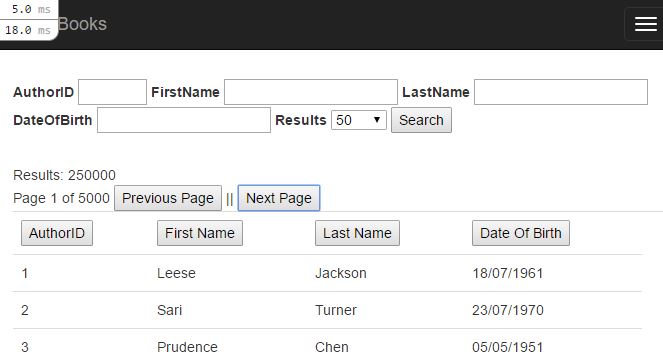 Filtering, Sorting and Paging. Also returning a count of total records. Difficult to get right in an ORM, and fine in SQL. Very fast performance (18ms). 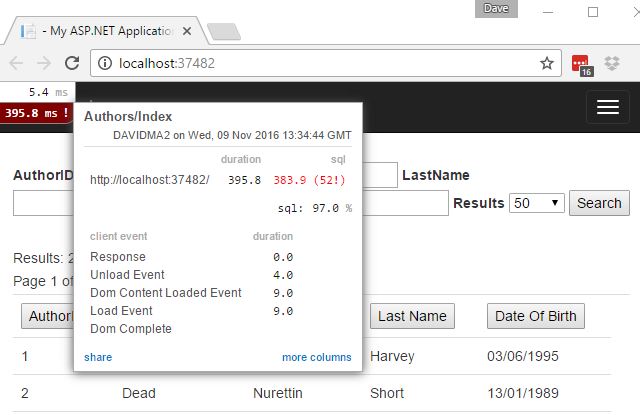 I have 50 Authors on the screen, and MiniProfiler is showing 52 queries, and showing as Duplicate queries. A huge red flag :-)

Lets get the database to do the hard work: 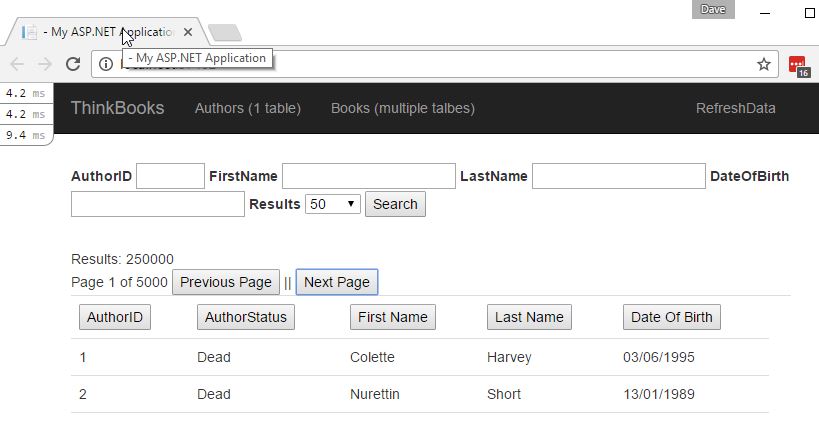 380ms to 9ms - much much faster! The other 2 times are browserlink javascript calls from visual studio. 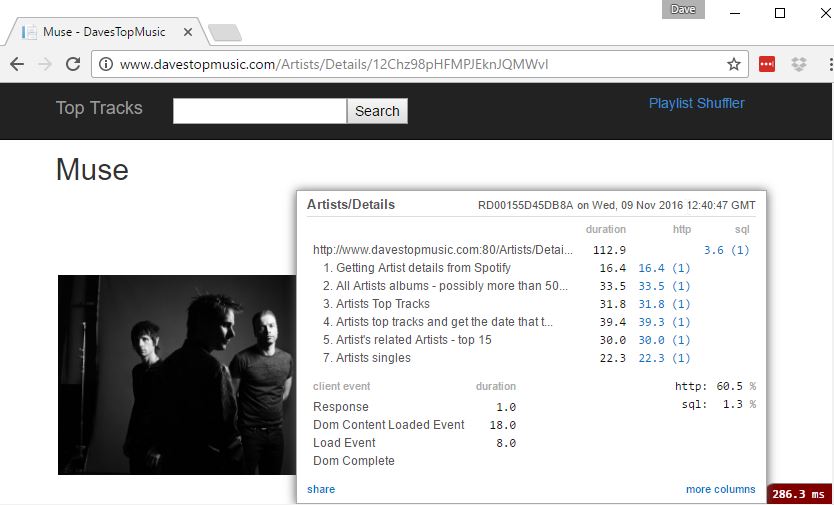 A project of mine which does many calls to the Spotify API. On this page there were 6 API calls, and 1 SQL call. MiniProfiler was very useful in highlighting which API calls were taking the most time Interestingly I found issues with Azure’s DNS, which meant it was much faster to run on EC2 for a while (was a geolocation lookup issue). Also I found doing API calls in parallel worked well for Spotify (whose response times are fantastic).

was a live site - http://www.davestopmusic.com/Artists/Details/12Chz98pHFMPJEknJQMWvI

Performance is an essential part of any business application, and a Feature

I use MiniProfiler to quantify performance.