Dave lives near Brighton in England and works as a freelance .NET developer, mentor, and SaaS company entrepreneur.

“I found your service outstanding, your engagements with myself, engineering and ops teams… are always highly professional, polite and collaborative” Senior Analyst, Tier-1 UK Bank

Dave is speaking on Functional programming in C# including Functional Brighton where he will demo a Broken link checker written functionally.

Dave did an interview on Channel 9 about streaming large amounts of data into SQL Server. 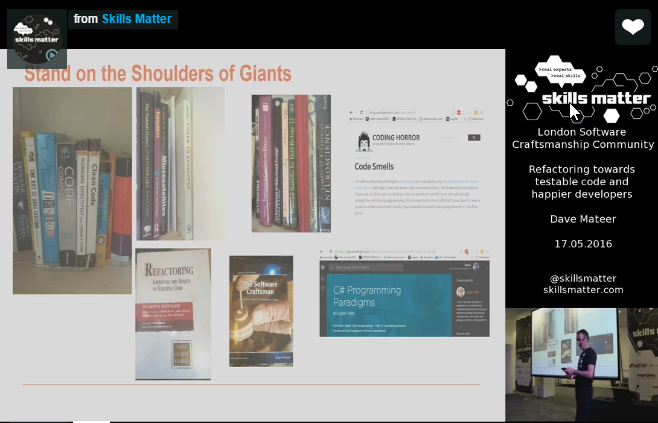 20min video of the talk on code quality

David will take you through a practical guide on how to do this with your codebase.

Challenge: “While coding at work I want to listen to great songs and albums that I know” - This live MVC5 site shows the most influential, seminal albums and great songs of different musical era’s. Explore the lists, preview songs (without a Spotify account). Select what you like, then save this playlist to your Spotify account.

I will start from basics and move quickly - how to explore a JSON API with .NET using GET, POST, PUT and DELETE

Find Artists, Songs, Playlists and Users Display great images and Artist Wikipedia articles Create and follow playlists Learn about OAuth2 - its seems complicated from the outside… I’ll show you how to do it.

Use MVC5 simply and close to the metal with Dapper as a high performance ORM.

This is going to be a pragmatic (source on Github), entertaining, musically inspiring, fast paced talk… Enjoy!

Public repos are on:
djhmateer